Pari-mutuel wagering makes its debut at Far Hills Saturday October 20, 2018. $900,000 in purses are available in 6 hurdle races and in the last timber race.

9 runners from England and Ireland will make their first start in the United States, adding intrigue to the day.

Director of Racing Bill Gallo wrote the morning line. Take his suggestions with a grain of salt and I strongly suggest that you follow the money.

8 of the 10 runners ran against each other in race 1 at Shawan Downs September 29. Shawan is very flat and one run speed does well. # 6 Roller Rolls On herded #5 Snowie Hill after the last jump to win. The filly #5 Snowie Hill drops to 140 pounds and #6 goes up to 152 pounds giving #5 Snowie Hill an advantage. However, #8 Caldbeck the Irish invader for red hot trainer Ricky Hendricks (Gordon Elliot) will win. Caldbeck has been training like a champ at Ricky’s farm.

Most runners have no wins or 1 win on the flat so this makes for a strange race. #4 Highly Prized is the fastest but making his 1st jump attempt with Willie Mullins. #5 Snuggling won the Gladstone last year but was disqualified for drifting after the last fence. #7 Motivational is quick and always hits the board. The filly #6 Inverness has won the most money over the jumps and only carries 142. #1 Zeppelin Ride has strong connections with jockey Jack Doyle and trainer Jonathan Sheppard. #3 Khafayya fades at the end of the race but could still land at the bottom of tris and supers. Pace will be hot early so play the closers to pick up the pieces.

#4 Cheers to Us has had an excellent year hitting the board in all 5 tries. #9 Indigo Heart won his last very easily and both runners (#4-#9)for Hendricks get a break in weights. #7 Mercoeur is high weight and always tries. #6 Curve of Stones gets in light with 140. #2 Winner Massagot debuts in the US for Valentine and gets no weight break (122 hurdle rating in England). #1 Osmoz ran huge winning by 20 lengths at Fair Hill in May and has been pointing for this return. Race pace will be honest and maybe a little quick early, giving closers / pressers a slight advantage.

Both Novice divisions are strong but this division is more competitive. # 2 City Dreamer (134 rating) and #7 Veneer of Charm (131 rating) both get in light because they are 4YO. If this were are handicap, City Dreamer #2 would carry 160 instead of 142 and #7 Veneer of Charm would carry 157 instead of 145. Owner Wendy Hendricks doesn’t think #1 Surprising Soul can carry the 162 high weight of the day to victory. #5 Boss Man will try to gut it out again on the front end but 156 pounds will take its toll. #3 Belisarius will be tough for the Daltons’. #6 Pik Em was aided by the slow boggy surface in his last 2 races and will have to show a new dimension on good turf. Boss Man will take the lead and try to slow the pace down as much as he can but off the pace will prevail.

Leg 1 of the NYRA cross county pick 4. Perennial leading steeplechase owner Irv Naylor spent $200K in the August 2018 Goffs sale to acquire #3 Amschel . He does not have a rating in the Irish database. Only 1 runner out of 36 has beaten him in 4 lifetime hurdle races. Light weight 4YO maybe a single but I have no additional information. #1 Cite broke his maiden in Nashville and has pointed for this race. #9 Detroit Blues has been training well after a good 3rd at Belmont. #5 Ice it likes to run 2nd and will hit the board. #6 All for Us ran well in his return at Shawan and always hits the board. No real early pace so #2 Gibralfaro may try to control early and stay as long as he can. Closers should prevail.

Leg 2 of the NYRA cross country pick 4. This is a tough race. 5 of 9 runners are making their US debut. When looking at Euros, I compare hurdle ratings. However, #2 Jaleo (hurdle rating 135) and #3 Tornado Watch (hurdle rating 118) are the only runners with hurdle ratings, the rest have Steeplechase ratings which do not translate to US racing. What’s the difference? American fences are essentially English hurdles where horses carry their speed. English steeplechase fences vary in height and require jumping that slows momentum, so runners don’t carry their speed over the fence. I know you thought all jump races were the same! 2016 winner #9 Dawalan comes off a tendon injury after a 17 month layoff and must be considered. #8 Hinterland ran well at Belmont. #4 Hammersly Lake returns from a 5th last year in this race, has the best steeplechase rating 165 and rider Brian Hughes returns. #5 Clarcam has not figured out the hurdles in his 2 US tries, losing momentum at each fence and faltering late. #6 All the Way Jose lost a head bob at the wire in 2017 but has been dull this year. Only a guess on race shape, slow early and slow again. Unfortunately, I don’t see a strong front runner that can steal the race.

A traditional end to “The Hunt” featuring 7 turns and 17 post and rail fences. I wonder how the jockeys count the number of laps. #2 Top Man Michael ran well at Shawan against Doc Cebu who came back to win again at Genesee Valley. #6 Two’s Company had the race won at Middleburg last Saturday, but jockey Sean McDermott took his foot off the pedal to save him for today. #5 Mystic Strike has the best timber jockey Mark Beecher finishing well in all his 2018 races. Jockey Beecher won this event last year. #7 King’s Apollo will be in the mix with former steeplechase rider now trainer Sanna Neilson. Race shape will be slow first, second and third laps. The race won’t start until after the 12th fence.

My strongest opinions are in the first race and the last race. Let’s make some $$$ on the steeplechase! How many times have you heard that before?

The over/under for the number of drunks that locked up is 60 (last year it was 57).

Good Luck at the races! 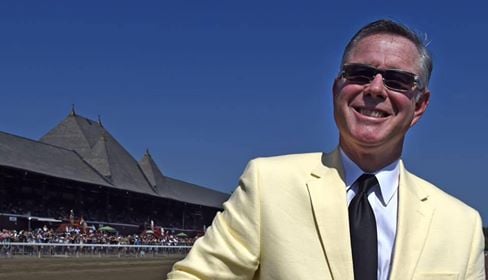